A bibliography for researchers of Chief Justice William Shaw Richardson and the William S. Richardson School of Law at the University of Hawaii at Manoa - with aloha.

William S. Richardson is the namesake of the law school. He is a former Chief Justice of the Hawai'i State Supreme Court, having served in that capacity from 1966 to 1982. He later served as a trustee of what is now Kamehameha Schools/Bishop  Estate. Prior to his service as the top jurist in Hawai'i, Chief Justice Richardson was Lieutenant Governor under John A. Burns. Before that, he was in the private practice of law, was an  advocate for statehood and served as chairman of the Hawai'i Democratic Party from 1956 to 1962.

Of native Hawaiian, Chinese and Caucasian ancestry,Chief Justice Richardson has termed himself as "just a local boy from Hawai'i." He graduated from Roosevelt High School and the University of Hawai'i at Manoa. He earned his law degree from the University of Cincinnati. At the outset of World \War II he volunteered to serve in the U.S. Army and saw combat as a platoon leader with the 1st Filipino Infantry Regiment. He was later inducted into the Infantry Officer Candidate School Hall of Fame.

The Richardson court helped expand native Hawaiian rights to use private property. It gave the public more access to private lands to beaches. It awarded new land created by lava flows to the state, instead of to nearby property owners. It broadened the rights of citizens to challenge land court decisions. In the court's own words, "The western concept of exclusivity is not universally applicable in Hawai'i." This new yet old way of thinking sometimes drew criticism from the government and legal profession but has become recognized as an enlightened approach for this unique place in the world.

In 1983, before his retirement from the bar, Chief Justice Richardson was memorialized with the naming of the law school in his honor. The William S. Richardson School of Law is the state's only law school and is considered by many to be his crowning achievement, having fought for its establishment for decades. Until his death in 2010 Chief Justice Richardson remained involved with the continuing development of the law school and was frequently called upon by the faculty, student body and community for his knowledge, insight and inspiration. He remained "in residence" at the school and could be found almost daily in his office, which he graciously shared with the University of Hawai'i Elder Law Program. 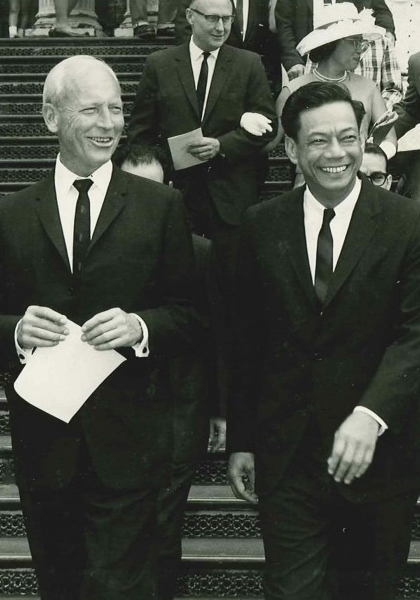 1967 Legislation - H.R. 284 requests the Governor to conduct a study of the feasibility of establishing a law school in the State of Hawaii.  The study was never done because funds wer never appropriated for it.  In response, Thomas Hamilton, President of the University of Hawaii, conducted a study funded by the McInery Foundation that was released in Jan. 1968.

Jan. 1968 - The Feasibility of Establishing a Law School at the University of Hawaii by the Office of the President is published.  It is widely known that Mildred Doi Kosaki authored the unsigned report.  It is privately funded by the McInerny Foundation. (University of Hawaii, Hamilton Library; Call No. KF292.H383 A54.)

There shall be a school of law at the University of Hawaii, to be under the direction of a dean or director who shall be appointed by the president with the approval of the board of regents. Subject to the availability of funds, faculty, and facilities, the school shall offer such courses of study as may be deemed appropriate and confer such degrees as may be authorized by the Board of Regents.

Hawaiʻi is respected throughout the United States as having a Legislature not bound and tied by tradition, but by a Legislature bound to tackle the challenge of new developments.

The new institution of law at the University of Hawaiʻi will bring a much needed solution to a problem existing in Hawaiʻi for too long.

Hawaiʻi students have had to travel to the mainland to obtain a law degree. This, as a concept, is not crushing for a varied social and educational exposure adheres to a broadened perspective in the healthy growth of a young community.

Crushing, for too long, however, is the situation faced by students who are unable to finance the travel, tuition and living costs away from home.

Now, the opportunity of equal education for all students, despite economic background, illuminates as a vision fulfilled--the fulfillment that each individual can contribute to his society in a way that satisfies his own self esteem.

It is becoming alarmingly difficult for / Hawaiʻi students to gain admission to mainland law schools and, therefore, Iimiting the vision of acquiring a legal education to a dim light.

The need for a law school is not uniquely a Hawaii dilemma. The rapid y' population growth, a sharp rise for legal assistance, a booming increase of law school applicants have awakened the Association of American Law Schools in projecting the need for more law institutions throughout the United States.

Hawaii remains isolated in being one y' out of seven states that has no tax-supported law school. We hope that this isolation in the very near future will not include our Pacific State.

The University complex, as well as our community, will be enriched by the intellectual discipline of law in generating a deeper understanding and appreciation of law, its process and its consequences. Other related fields of discipline will profit through the research and academic activity of solving social and economic problems through cooperative adventures. Practicing attorneys will be enlightened through the offering of special and advanced courses through a continuing education program. The illuminating presence of a body of legal scholars will radiate in fact throughout the island wide community.

Mr. Speaker, Hawaiʻi‘s reservoir of talent will therefore be employed to the pressing problems of our changing technological society by the establishment of a law school at the University of Hawaii. Thank you."

The motion to adopt the report of the Committee and to pass H. B. No. 937, having been read throughout, on Third Reading, was put by the Chair and carried by a vote of 50 ayes to 1 no, with Representative Fong voting no.

At this time, Senator Rohlfing rose to speak against the bill. He said he is convinced by research and by the financial aspects involved that Hawaii is not ready for a law school. He said it is a matter of whether a person believes that the State can afford the program at this time or
whether there are not other alternatives not explored adequately to give students in the community a chance to go to mainland schools on reciprocal basis. He added that other agreements can be worked out such as subsidies for students without adequate funds.

Senator Rohlfing also pointed out that unlike the bill on a medical school talked about a week ago, although the bill on a law school talks about an appropriation for research and development phase, it does say in Section l, "There shall be a law school", which is quite a distinct difference from the bill dealing with medical school. He said rhe Senate should give it more consideration before making a commitment at this time.

Senator Yee then spoke in favor of having a law school at the University of Hawaii atthough he said he has always opposed it before. He said that when the law school is started he wants to be exceptionally sure that it is going to rake care of the island residents, that he does not want it to be for transients because the only reason he is shifting his vote is that many island students have difficulty being admitted to law school even with excellent grades and Hawaii should take care of its own.

He also said that the State is having monetary problems and he hopes that the Board of Regents and the legislature take into consideration a tuition that is adequate to fund the law school, that the students pay a tuition fee that is in accord with mainland standards.

Senator Mirikitani also spoke in favor of the bill pointing out that many young people with excellent grades have been refused entrance in state colleges throughout the nation, and those who have returned to Hawaii from schools abroad are faced with a local study program in order to pass the bar examination. He said money is not the real problem compared to the rest of the appropriation that the University of Hawaii uses, so if the young people are the main concern and if they are to be thought about professionally, now is the time to think about it.

Senator Wong speaking in favor of a law school said that the legislature and the Senate in particular can be proud of the program of higher education this year which has an excess of a hundred forty million dollars for the next biennium and more importantly iti commitment for quality education and quality programs. He added that a policy of controlled growth which will insure open admissions to all qualified residents have been adopted and that in all respects whatever program that is started with the law school will start at such a time that will in no way compromise the quality of that program.

Senator Taira remarked that just so it wouldn't be an issue confined solely to members of the legal profession, as a nonlawyer he would like to add that he is in favor of having a law school.

Senator Henderson then rose to speak against the measure saying that the State of Hawaii has financial problems and he feels it is foolish to proceed along the course of committing 800,000 dollars to a law school.

The motion to adopt Stand. Com. Rep. No. 797 and to pass H. B. No. 937, H. D. 1, S. D. 1, entitled: "A BILL FOR AN ACT RELATING TO THE STUDY OF LAW AND MAKING APPROPRIATIONS THEREFOR", having been read throughout, on Third Reading, was put by the Chair and carried on the following showing of Ayes and Noes:

Jan. 1972 - University President Harlan Cleveland publishes Programs in Legal Education at the University of Hawaii Including a Proposal for the Establishment of a School of Law. [s.l: s.n.], 1972. (University of Hawaii, Hamilton& Law Libraries; Call No. KF292.H382 A52)

Sep. 1973 - Universtiy of Hawaii Law School inaugurated by C.J. Richardson and Dean David R. Hood.  There are 53 students in the first class and six professors.  Classes began in a "temporary" wooden building in a remote part of the UH campus called "The Quarry."  Tuition was $170 a year.

Apr. 28, 1976 Legislation - Act 28, Making an appropriation for the plans and construction of interim law school facilities. [H.B. 2895] (Legislative Reference Bureau)  This legislation allocated $838,000 for plans, construction, and equipment for interim Law School facilities and for facilities for programs displaced by the Law School at the University of Hawaii, Manoa Campus.

1982 Legislation - H.R. 415, introduced on the 59th legislative day, a resolution congratulating Dean Richard S. Miller on his appointment as Dean. 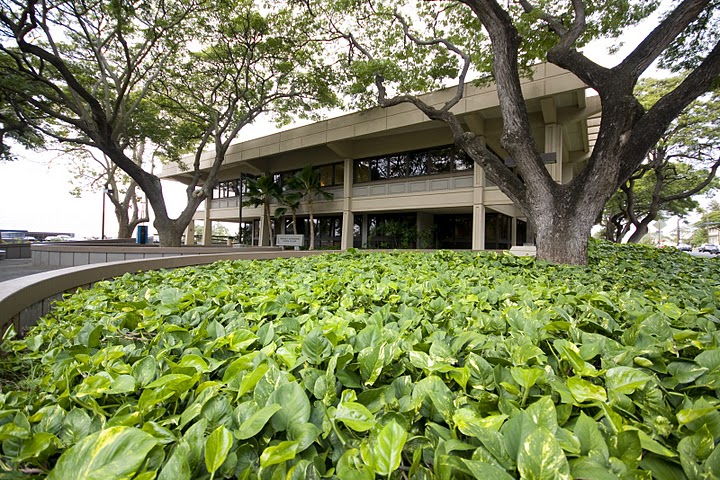