The Republic of Palau's National Congress is known as the Olbiil Era Kelulau (OEK), which means "House of Whispered Decisions." The Congress consists of two houses which sit for four-year terms. The House of Delegates has 16 members, one from each state. The Senate has 9 members whose representation is based on district population.

The Executive Branch of the government of Palau consists of the President, the Vice President, and the Council of Chiefs. Assisting the top executives are the cabinet ministers and their supporting staff. The Vice President serves as one of the ministers.

The Council of Chiefs is composed of one traditional chief from each of the Republic's states. The Council advises the President on matters concerning traditional laws, customs and their relationship to the Constitution and the laws of Palau. 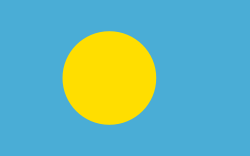 The flag of Palau is light blue with a large yellow disk shifted slightly to the hoist side. The blue color represents the ocean. The disk represents the moon. Palauans consider the full moon to be the optimum time for human activity; it is also considered a symbol of peace, love, and tranquility.

The National Court has not been active since 1987 when Judge Frederick O'Brien, the last presiding judge, was reassigned to the Supreme Court.

The Land Court was established in 1996 by act of the Olbiil Era Kelulau and vested with civil jurisdiction over civil cases involving the adjudication of title to land or any interest in land. See 4 PNC §§ 203-205, 208. Appeals from the Land Court go directly to the Appellate Division of the Supreme Court.