A bibliography for researchers of Chief Justice William Shaw Richardson and the William S. Richardson School of Law at the University of Hawaii at Manoa - with aloha. 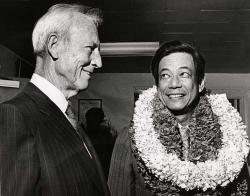 The date refers to the issue of the newspaper, and the number (or letter/number) refers to the page.The Maui News converted to a new page format that included sections in 1969. So you would see page 1, prior to 1969, and page A1, after that time. An asterisk (*) indicates there is an illustration included; a photo, architect’s sketch, an artist’s drawing, or a map. [Index available at http://www.mauimuseum.org/UserFiles/File/Maui_News/maui_index_6-17-10.pdf.]

Abstract: In 1980, Chief Justice William S. Richardson spoke to the eighth graduating class of the University of Hawai'i Law School, which wasn't yet named for him and didn't yet have a building. There are stories about how as chief justice, Richardson took young lawyers under his wing, how he would invite law clerks to talk-story sessions in his chambers at the state supreme court, and there are many who credit his example and his encouragement for making their careers possible.

Abstract: Under the Richardson court, native Hawaiians and the public gained access across private property and more.  The present-day logos of the Big 5, which dominated Hawaii business from the late 1800s to the mid-1900s. William S. Richardson as chief justice of the Hawaii Supreme Court from 1966 to 1982, drew a line in the sand in favor of the public.